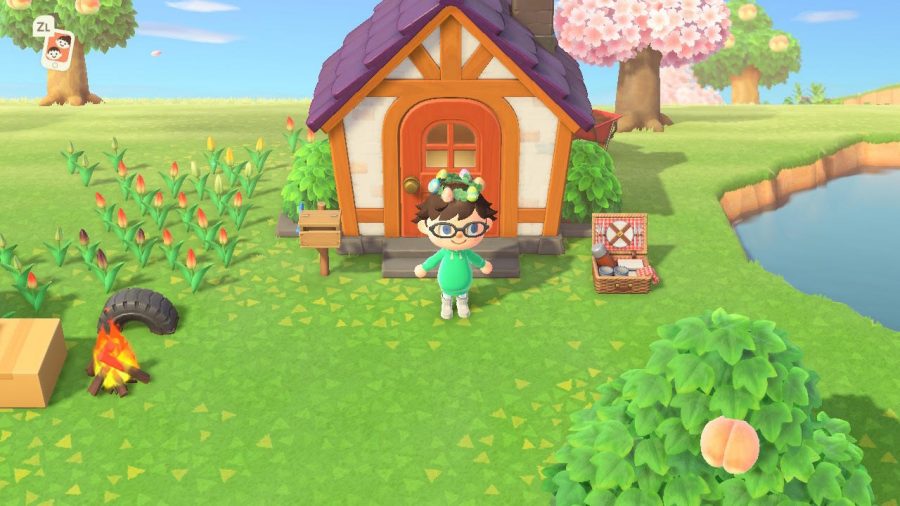 Animal Crossing: New Horizons features a young looking character that moves to a deserted island. The game brings back popular characters such Timmy, Tommy, and Tom Nook as they join you on the island you choose at the start of the game. Along with the Nooks, you have two characters join you. For my own game, I have Reneigh, a horse character new to this game, and Hamlet, a hamster. It also gives you a native fruit, and I am not ashamed to admit that I restarted the game until I received peaches for my native fruit. As you progress, you will have a series popular characters join your island like the Abel Sisters, Kicks, and K.K. Slider come visit your island, and until eventually you have a complete island.

You are able to name your island however you want, though it is recommended you keep the name PG, as Animal Crossing: New Horizons can be played with others, due to the fact that Nintendo offers an online subscription service. On the island, you’ll be given a tent to live in, but you can easily upgrade your house. It can be expensive to upgrade your house, but capitalist Tom Nook offers an interest-free loan to make up for it.

While it has a sense of familiarity, and has many of the same features as the previous mainline games, it brings a fresh set of new features. In this game, you are able to craft using workbenches, and customize tools and some crafts as well. Having this ability to customize is rather nice, as it can save your tools from breaking.

Nook Miles are also a new form of currency, which are meant to let you explore the game more, and gives you the chance to visit new islands, to go fishing for the fish that may not be on your island, or to hunt for bugs that may be more rare on your native island. There are many different islands that you can visit using Nook Miles. Besides using Nook Miles to buy a Nook Miles Ticket to fly to a different island, you can also use it to buy decorative items, to buy Bells, the currency in the game, and to help expand your storage.

The Nook Miles Ticket can help you expand your island, as when you travel to the remote island you can encounter other characters, like Ellie, an elephant that I had move to my island. Right now, many people I know are hunting for Raymond, the first smug cat in the series.

The game is not without its flaws though. This is not a game that many people can just play for hours on end, it is better suited for bursts. The Bunny Day event is a bit annoying as well, collecting the eggs is rather annoying, and especially whenever you are fishing or fossil hunting, and you receive an egg instead.

Overall, I find that the new Animal Crossing game is thoroughly enjoyable, especially for the $60 price. It is calming, and it is wonderful for maybe an hour or two between the online classes that we have switched to now. The game offers different features, some that I did not mention at the fact that I want others to experience Animal Crossing: New Horizons for themselves.

In my honest opinion, it’s a 9/10, and a perfect way to spend quarantine. The pros of the game completely outweighs the cons, and much like my friends, I can see myself sinking over 100 hours into the game. From building up the museum, to completing my island and house into the way I want it, I will be playing AC:NH for weeks and years to come.