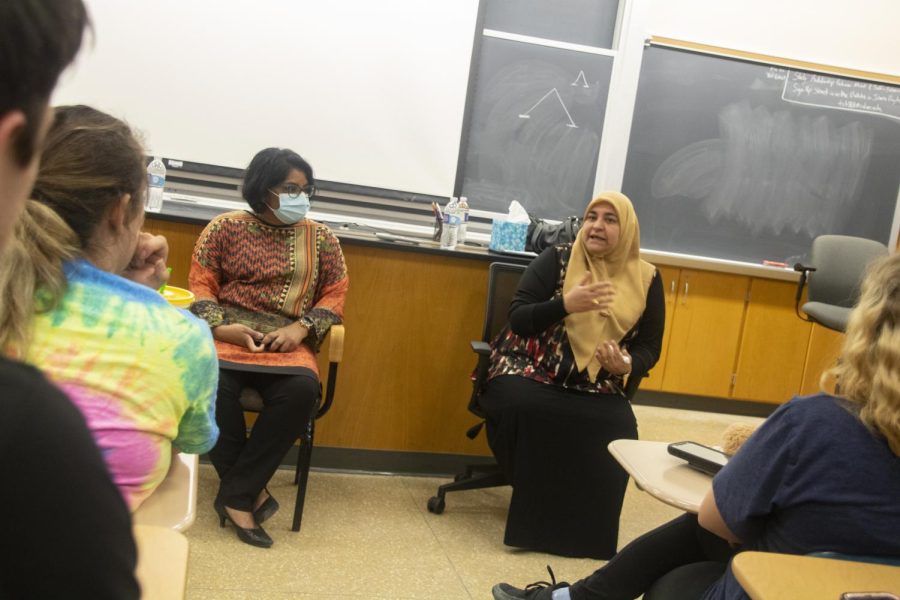 The Afghanistan Briefing series came to a close October 8 with “Women & Islam,” the fourth in the series held by Culver-Stockton College faculty.

Presented by Dr. Omaima Ebeid, Dr. Kanwal Alvarez and Dr. Andy Walsh, the event largely covered the differences between the text of the Quran and the cultural traditions that often supersede it, as well as the experiences of Muslim women in Canton, Missouri. Students and faculty at C-SC had the chance to listen to two Muslim women of the College’s faculty sharing their perspective and experiences. While less directly pertaining to Afghanistan than past briefings, the experience provided a more nuanced view of a faith which in recent decades has been unfairly stereotyped as misogynistic. The event was co-sponsored by the American Association of University Women (AAUW), Women of Promise, and Diversi-T.E.A.M.

The presenters spoke extensively on the ways that Islam has traditionally provided for women’s rights in ways that the Christian legal tradition has not. In the faith’s holy texts, arranged marriages are not permitted unless the wife agrees, knows, and likes the husband. Dating in these relationships, set up through a family’s networking, is expected to be presided over by a chaperone, as is common in many Christian denominations. In Islam, women have the right to tailor their marriage contract. For instance, they can take a salary, or set up a prenuptial agreement. Husbands aren’t permitted to disinherit their daughters or wives, and in some traditions, such as Egyptian law, inheritance is proportioned to always go to one’s family. While the rules aren’t always followed in Muslim communities, these cases occur when local traditions that are favored over the actual text of the Quran.

Dr. Ebeid shared interesting facts about the tradition of veiling, noting that the tradition predates Islam, and can be seen in Christianity, like in the well-known nuns’ habits, or in some traditions of Judaism. During her time in New York, Dr. Ebeid noted, she was often confused for a member of the Orthodox Jewish community there, as they often wore headscarves similar to the hijab. In mainstream Islam, the wearing of the Hijab, the familiar headscarf, or the Niqab, a full-body covering similar to those worn by women in Ultra-Orthodox Judaism, is an entirely voluntary tradition and is the woman’s personal choice, seen as a virtuous act that can help to bring one closer to God. The verse that advocates veiling isn’t always interpreted literally, as Dr. Alvarez stated that she follows an interpretation that sees the passage as advocating for keeping a veil over one’s mind and heart to keep from thinking dirty thoughts or gawking, not requiring literal headwear. Ebeid also detailed how the Hijab doesn’t in any way limit physical ability, as numerous medal-winning Olympians have sported the garment.

Dr. Alvarez shared her experiences, a childhood in Pakistan, attending a Catholic school, and moving to the Midwest later in her childhood. The September 11 tragedy, which occurred in her senior year in college, catapulted Islam into relevance in the minds of Americans and drew discrimination and tension. Raising her children in Canton, Dr. Alvarez says some school officials didn’t understand things like why they simply couldn’t take the Pepperoni off their pizza, even though the juices of the pork product had baked into it, or sing non-secular Christmas songs at the school concert.  Dr. Ebeid also shared the extensive history of female heads of state in Muslim nations, as well as the fact that seeking knowledge and education is seen as an obligation in Islam, unlike the Taliban’s non-textual policy of denying women and girls access to schools. She shared a well-known adage which demonstrates these attitudes, “a mother is like a school, if you educate her well, she’ll educate the whole community well.”