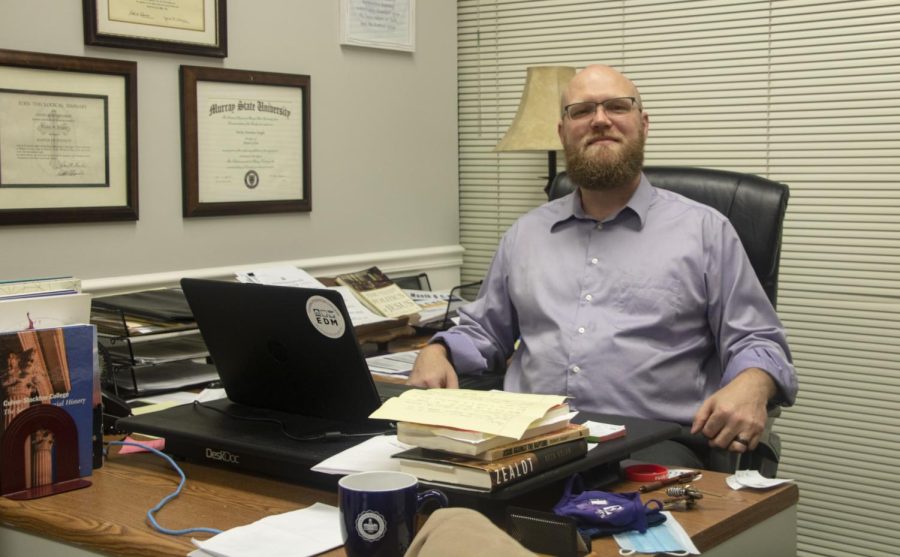 Knight is still settling into his duties as chaplain, and working to bring back opportunities for students to engage with their spirituality and create spaces of community and support. While formal worship services haven’t yet found their footing in the wake of the pandemic, Knight remains available as a source of support for students. He says he is eager to help the campus’ community engage with the deep questions and quest for meaning that characterize the human experience regardless of affiliation or practice. Knight is an ordained minister in the Christian Church (Disciples of Christ) with standing in the United Church of Christ.

Knight graduated from McKendree College (now McKendree University) where he played baseball, and received a master’s degree from Murray State University.  Although he began a Ph.D. in history, he wrestled with a calling to the ministry and transferred to Eden Theological Seminary where he received his Master of Divinity.  “I came here to Culver after about 19 years of pastoral ministry. And most of its the vast majority of its senior ministry. And I’ve served churches, and Missouri, Southern California and South Dakota,” Knight says.

Rev. Knight described his calling and what his role means to him.  “As I grew into adulthood, [I] really began to ask the deep, deep question of, you know, so what will my life mean? What is my sense of purpose? That’s when I started to explore the possibility of going into pastoral ministry. And I took a I took a couple years to really just focus on that and discern if that’s really what I wanted to do.”

Knight also has a connection to social issues.  “I have a very deep held deeply held commitment to social justice and fairness, social equity, embracing diversity and helping churches understand what that means. Helping people of faith understand all that, that means to help lead them into places of ecological stewardship, and justice for the earth in the in the environment.”

Knight views religion as a common experience, an act of making meaning in the world rather than the formalized gatherings that people often consider central to religious practice.  He says, “I think of ministry as helping people affirm their creativeness. Help helping people, see God and experience God beyond formal creeds and doctrines that are, you know, tied to only to institutional expressions of religion. Also embracing the educational, an intellectual side of faith, helping people develop, helping spiritual seekers develop an examined faith, understanding why it is they’ve come to believe what they believe and to examine that critically, and to not be afraid of really asking deeper questions in the self, why do I believe this? or Why do I believe that? Our you know, recognizing how they conceptualize what God is and what God calls us to do in this life?”

Knight feels strongly that people of any faith (or none at all) can share in the experience, and have productive conversations about finding meaning and significance. He invites students to engage in a deep questioning and search for meaning that compliments the college’s mission of a liberal education and the broadening of the mind, and is eager to speak with students, and serve to provide advice and support in their search for truth and meaning.

In addition to his role as chaplain, Knight will be teaching courses as an adjunct professor, with the most notable scheduled being a 3-week course on indigenous religions in the spring, called Native America in Contemporary Society. The course will feature a visit to Cahokia, as well as a week-long trip to the Pine Ridge Indian Reservation in South Dakota. With 18 seats, the course will cost $1050, with a $100 deposit. Knight anticipates teaching further classes in religion and history, as well as possibly philosophy. Students seeking the Chaplain’s services can stop by Knight’s office opposite and to the right of the Cafeteria in the Crown Center, or contact him by email.